As the dust settles following the worst day for stocks in 2019, investors are rightly wondering whether this is the time to batten down the hatches – or if it’s an opportunity to pick up some of the pieces.

Apple was one of the biggest decliners in Monday’s trade-war fueled selloff, shedding more than 5.2% of its value on the session by the time the closing bell rang. That’s a colossal drop for a $900 billion company.

And with shares only clawing back 1% and change in Tuesday’s trading session, it’s not clear whether buyers or sellers are driving the ship here. To figure out what’s happening in Apple – and how to trade it from here – we’re turning to the charts for a technical look.

Apple is a holding in Jim Cramer’s Action Alerts PLUS member club. Want to be alerted before Jim Cramer buys or sells AAPL? Learn more now. 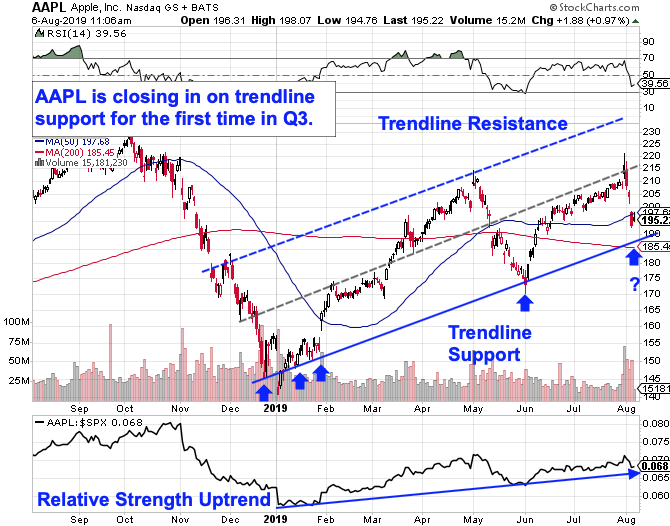 At a glance, it doesn’t take a trading expert to figure out Apple’s price trajectory this year. In fact, the price action is about as straightforward as it gets. Apple has been bouncing its way higher since the calendar flipped to January, catching a bid on every successive test of trendline support.

In other words, it’s a “buy the dips” stock.

Now, as shares fall back into correction-mode this August, they’re closing in on the first test of trendline support since the start of June. It’s worth noting that the prior move in June propelled shares some 26% higher.

To figure out whether Apple can do it again, it’s key to keep a close eye on how shares react to support. Rather than anticipating a bounce higher, it’s a better move to wait for the bounce to happen before jumping on shares of Apple. While that will come with some opportunity cost, waiting to pull the trigger greatly reduces the risk of the trade by waiting for buyers to affirm that they’re still in control of shares first.

Relative strength, the indicator down at the bottom of Apple’s chart, adds some extra confidence to the upside breakout here. Apple has been systematically outperforming the rest of the broad market since the start of the calendar year, and with that uptrend still intact, Apple remains predisposed to outperform.

The bottom line is that if Apple manages to bounce off of trendline support (currently right above $185) then we’ve got a clear signal that this tech behemoth is likely to keep on rallying in the second half of 2019.

In the meantime, it makes sense to sit on the sidelines for the next few sessions and see how this correction plays out.