The year 2019 is turning into a spectacular one for social media heavyweight Twitter (TWTR – Get Report) .

Year to date, shares of Twitter have surged 44.5%, besting the S&P 500’s momentous run this year by a factor of two. Better still, shares aren’t showing any signs of a slowdown this summer.

As Mr. Market rounds the corner to August this week, shares of Twitter look primed to keep on leading stocks higher. That’s thanks in part to a solid earnings beat last week that propelled shares almost 9% higher. But earnings only tell part of the story. Longer term, Twitter’s technical trajectory has been as straightforward as it’s been bullish.

To figure out how to trade Twitter from here, we’re turning to the chart for a technical look. 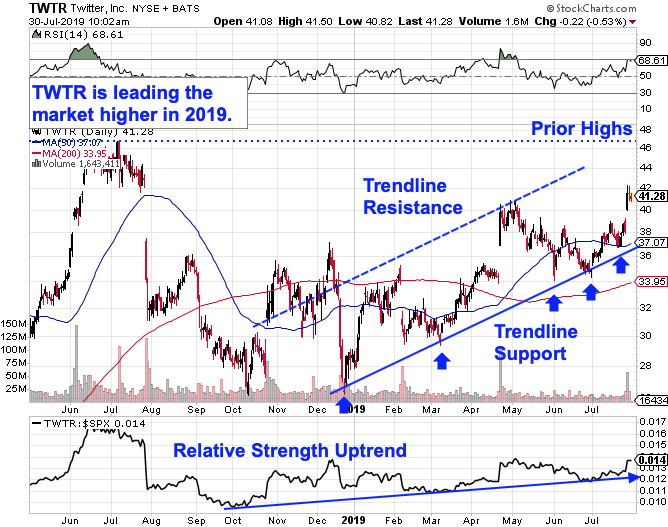 Like a lot of prominent names right now, it doesn’t take a technical trading whiz to figure out what’s been going on in shares of Twitter so far this year. Instead, the price action is about as simple as it gets.

Since the calendar flipped to January, Twitter has been bouncing higher in a well-defined uptrend. So far, every test of trendline support down at the bottom of Twitter’s price range has resulted in a bounce higher. As Twitter bounces off support for a fifth time on the heels of earnings, we’re seeing a clear buy signal this summer.

That’s confirmed in part by relative strength, down at the bottom of Twitter’s chart. Twitter’s relative-strength line has been in an uptrend of its own since last fall, indicating that shares continue to systematically outperform the rest of the broad market right now. As long as relative strength keeps pointing up and to the right, Twitter remains predisposed to continue to outperform the S&P.

As always, risk management is key in shares of Twitter right now. Prior lows are around $35. The other side of that looks like a reasonable place to park a protective stop; if Twitter violates that $35 line in the sand, then the uptrend is over and you don’t want to own it anymore.

In the meantime, buyers are still clearly in control of the price action, and Twitter continues to be a “buy the dips stock” this summer.