Back in early May, shares of the agriculture and construction equipment giant went tumbling on trade-war concerns, only to finally catch a bid and reverse course heading into June. All told, Deere has lived through about a 45% round-trip move between the start of May and today, July 23 – some pretty massive volatility during a stretch when the S&P 500 has enjoyed comparably calm seas.

But that tumultuous trading is actually setting the stage for a potential breakout to new all-time highs for shares of Deere. To figure out what’s happening here, we’re turning to the chart for a technical look: 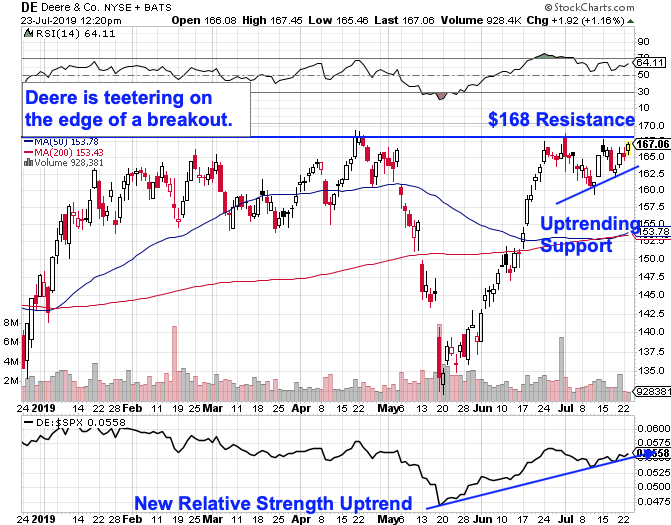 It’s hard to miss the abrupt about-face in shares of Deere this summer.

After surging higher starting in the second half of May, this stock has spent all of July cooling off from a momentum standpoint with some sideways price action. And that sideways consolidation is what’s actually setting the stage for a breakout.

Deere is currently forming a pretty textbook example of an ascending triangle pattern, a bullish continuation setup that’s formed by long-term resistance above shares at $168, with uptrending support to the downside. If Deere can muster the buying pressure to materially break out through $168, we’ve got a clear signal that buyers are still in control this summer – and that it makes sense to join them.

Relative strength, the side indicator down at the bottom of Deere’s chart, has been in an uptrend of its own since the one-two punch of trade war fears and earnings guidance disappointment scuttled shares in May. That’s an indication that Deere is making up for lost time by systematically outperforming the broad market, even now during this sideways cool-off.

While it might feel a little nerve wracking to go long a stock like Deere on the tail-end of such a big rally, context is key.

The fact that June’s buying pressure came after a violent selloff means that buyers likely still have gas in the tank for continued upside. Seeing a breakout through $168 here serves as confirmation of that.

From a risk-management standpoint, it makes sense to pay attention to what might invalidate the bullish setup that’s been forming in Deere this July. If shares trade below the $155 level that acted like support earlier this year, consider the buy setup dead and cut your losses.