While most investors continue to be fed the same old song and dance about ecommerce giant Amazon’s (AMZN – Get Report) ongoing disruption of the retail sector in 2019, something interesting has been quietly happening…

Retail stocks have been ripping higher in the last few weeks, with the big S&P 500 Retail Index surging more than 7.4% higher since the middle of August – about double the upside of the rest of the S&P over that same stretch.

And right now, the poster child for the return of retail is housewares retailer Bed Bath & Beyond  (BBBY – Get Report) .

In the last month, shares of Bed Bath & Beyond have been surging, up more than 22%. Better yet, it looks like there’s still more where that came from. To figure out how to trade it from here, we’re turning to the chart for a technical look. 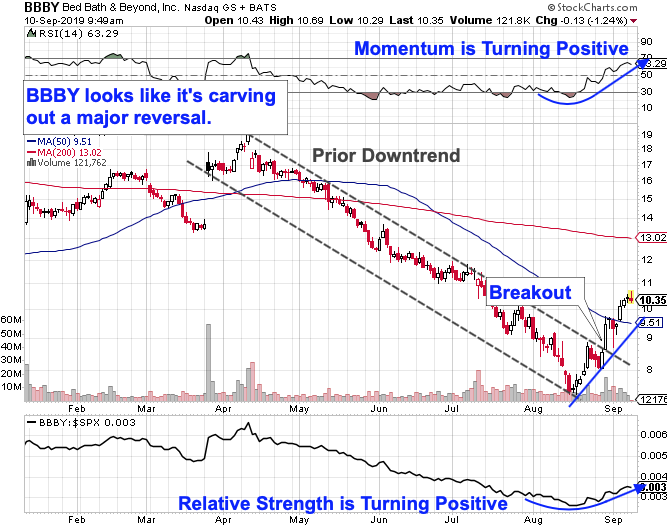 At a glance, it’s not hard to spot the prevailing trend that’s been in play in Bed Bath & Beyond year-to-date – and it hasn’t been a bullish one. Even with the return to rally-mode that shares have enjoyed in the last month, this big retail name is still down more than 8% on a price basis since the calendar flipped to January, underperforming the rest of the broad market in a big way.

That’s important context when it comes to understanding the staying power behind Bed Bath & Beyond’s rally. While the 22% climb shares have undertaken in the last four weeks might sound like too far, too fast on an absolute basis, relative to the correction shares have endured this year, it’s actually pretty reasonable.

And shares look primed to continue to make up for lost time.

Bed Bath & Beyond broke out of an extremely well-defined downtrend back at the end of August, and they’ve been setting higher highs ever since. Right now, it looks like we’re seeing the establishment of a new uptrend that could undo more of the corrective price action from this spring.

That’s confirmed in part by relative strength, the indicator down at the bottom of the price chart. Relative strength just turned positive for the first time in 2019 for Bed Bath & Beyond, signaling that shares are finally systematically outperforming the broad market as we head deeper into September.

Following the surge higher Bed Bath & Beyond has undertaken in recent weeks, it wouldn’t be out of character to see a modest correction in the next few sessions back down to newfound trendline support, currently right around the $9.50 level. Look for dips of that scale as a buying opportunity in BBBY on the way up.

Meanwhile, risk management remains key for this trade. If shares materially violate $8, then the new uptrend is over and you don’t want to own it anymore. Until then, this retailer looks primed to keep climbing in September.