Tech giant Microsoft  (MSFT – Get Report) is enjoying a stellar run in 2019. Year-to-date, shares have surged more than 34% higher, leaving the S&P 500’s otherwise impressive rally in the dust.

And there’s more where that came from.

While many investors are looking at high-performers with skepticism, on watch for signs of the next leg lower, the fact of the matter is that stock market leadership continues to be rewarded as we head into September. So, while volatility has been ticking higher in August, Microsoft has managed to hold up relatively unscathed.

More importantly, shares look like they’re setting the stage for another substantive leg higher, thanks to a bullish price setup that’s taking shape. To figure out how to trade it, we’re turning to the chart for a technical look. 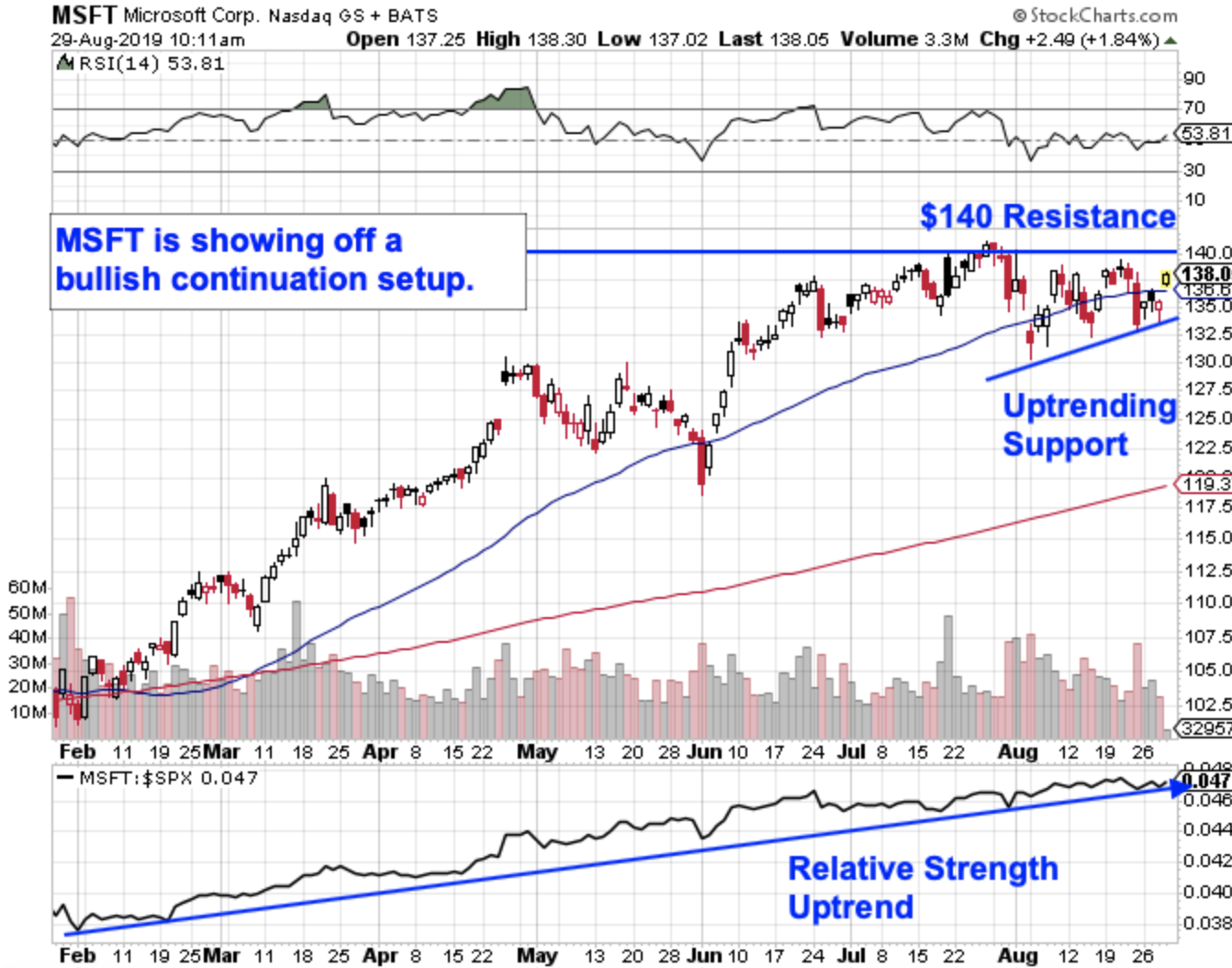 There’s nothing subtle about the nonstop rally that shares of Microsoft have been enjoying this year. In fact, for much of 2019, the price action has been about as straightforward as it gets: Microsoft has marched higher in a well-defined uptrending channel that’s provided clear-cut buying opportunities on every test of support.

More recently, though, shares have taken on a more sideways trajectory. And it’s that consolidation that’s setting the stage for the next up-move in Microsoft as we head into September.

Microsoft is currently forming an ascending triangle pattern, a bullish continuation pattern that’s formed by horizontal resistance up above shares (at the $140 level in this case), with uptrending support to the downside. A breakout materially above the $140 level signals that it’s time to buy again.

Why all of that significance at that $140 level? It all comes down to buyers and sellers.

The $140 resistance level is a price where there has been an excess of supply of shares; in other words, it’s a spot where sellers have been more eager to step in and take gains than buyers have been to buy in August. That’s what makes a breakout above $140 so significant – the move means that buyers are finally strong enough to absorb all of the excess supply above that price level.

The price setup in Microsoft is being confirmed right now by relative strength, the indicator down at the bottom of the chart. Relative strength has been holding onto an uptrend of its own all year long in Microsoft, signaling that this big tech name continues to systematically outperform the rest of the market, even now.

As always, risk management is key in this trade. If shares violate their pattern lows around $130, then the setup is broken and you don’t want to own it anymore.

In the meantime, Microsoft remains a stock to keep a close eye on in the sessions ahead.

Labor Day Sale: Join Jim Cramer’s Club for Investors and Save. Get 57% off on your membership to Jim’s Action Alerts PLUS club for investors.