The companies on the front lines of the trade war are getting a bit of a reprieve to start the week, following the announcement from Commerce Secretary Wilbur Ross that Chinese device maker Huawei will get another 90 days to buy from American suppliers.

That’s proving to be a good thing for the tech sector, as investors hope that the dialog might spill over more broadly to the trade discussions ongoing with China.

One big U.S. tech name that counts Huawei as a customer is Advanced Micro Devices (AMD – Get Report) – shares are getting a boost from the news cycle Monday, up 2.6% just before noon.

That’s putting shares of AMD in a positive price trajectory for the first time in the last couple months. To figure out how to trade shares from here, we’re turning to the chart for a technical look. 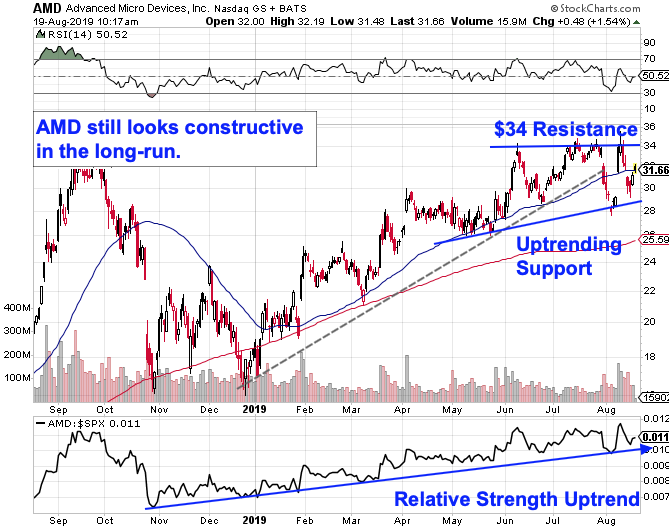 AMD’s price action has been choppy lately. While shares spent most of 2019 in a well-defined uptrend – one that sent a clear-cut buy signal in mid-June that was followed almost immediately by a push to new highs – things have changed as trade war developments and recession fears entered the market.

That prior uptrend (the gray dashed line on the chart above) got violated at the start of this month, and shares have been stuck in a choppy range ever since.

But while AMD’s picture-perfect rally may be over, it’s still far too early to count out this momentum tech name. That’s because shares actually still look constructive in the long term, thanks to a bullish continuation pattern that’s setting up in the long term.

AMD is currently forming an ascending triangle pattern, a bullish continuation setup that’s formed by horizontal resistance up above shares at $34, with uptrending support to the downside. Simply put, as AMD bounces in between those two technically significant price levels, shares have been getting squeezed closer and closer to a breakout through the $34 level.

Once that happens, we’ve got a brand new buy signal in AMD.

Shares aren’t quite there yet, but they’re close.

Meanwhile, relative strength continues to look extremely bullish in shares of AMD right now. That gauge, down at the bottom of the AMD chart above, indicates that this stock continues to systematically outperform the broad market in 2019, even during this recent bout of volatility. As long as that relative strength uptrend remains intact, AMD continues to be a stock that you should own.

Investors should keep a close eye on the $34 level in the sessions ahead. If shares can muster the strength to catch a bid up above that level, AMD opens the door to considerably more upside in the second half of 2019.