No question, 2019 is turning into a fantastic year for shareholders of tech giant Microsoft (MSFT – Get Report) .

Year-to-date shares of Microsoft are up approximately 35%. That’s basically double the price performance of the rest of the S&P 500. Better still, Microsoft’s rally isn’t showing any signs of slowing down this summer, despite an influx of volatility that’s left investors generally rattled this week.

So far, Microsoft has been a “buy the dips” stock all year long — and shares look as if they’re showing investors another buyable dip right now. To figure out how to trade it, we’re turning to the chart for a technical look. 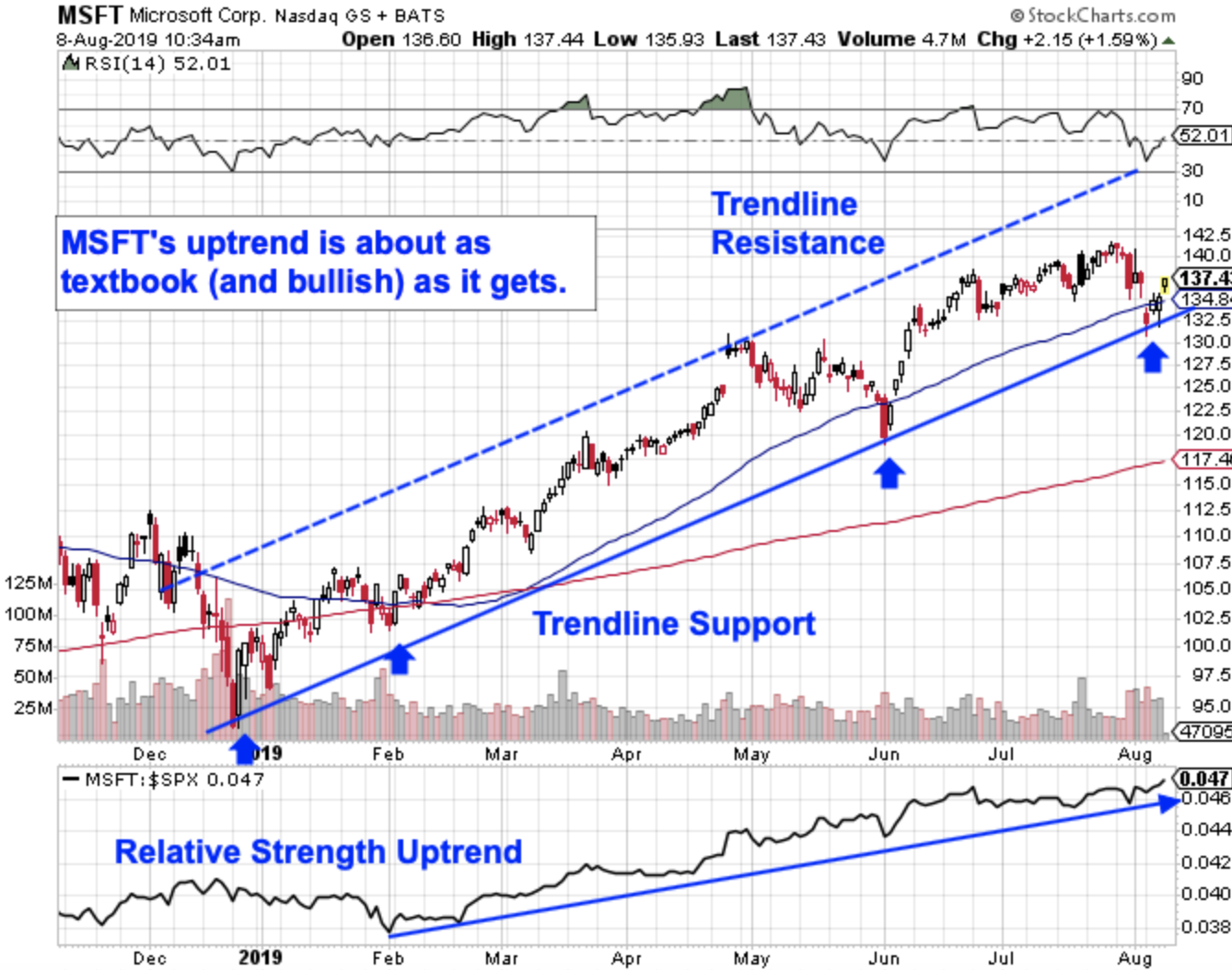 At a glance, you don’t need to be an expert trader to figure out what’s going on in shares of Microsoft. The uptrend in this big stock is about as textbook – and bullish, for that matter – as they get.

Microsoft’s uptrend kicked off at the start of the calendar year, on the heels of the deep broad market correction that stocks endured last fall. That’s not completely unique. Many stocks initiated similarly well-defined uptrends in early January, as correlations with the S&P remained strong.

But Microsoft’s different in the scale of the move higher. For every dollar the S&P has generated for investors’ portfolios this year, Microsoft has generated two dollars, on average, all while keeping the risk-reward tradeoff incredibly well defined.

Now, exact same long-term momentum setup that presented its last buying opportunity at the start of the summer is showing off what looks like another low-risk entry opportunity in shares.

The test of trendline support we saw in Microsoft at the beginning of August is getting confirmed by a bounce higher in the last few sessions. That’s an indication that buyers are stepping in once again at the bottom of Microsoft’s price range.

Relative strength, the indicator down at the bottom of Microsoft’s chart, adds some extra confirmation that this is still a name you want to own in the second half of 2019. Relative strength has been in an uptrend of its own all year long, and it continues to post higher lows this summer. That shows us that Microsoft has systematically outperformed the broader market, even now.

Of course, risk management is crucial – even for a solid setup like Microsoft. Prior lows around the $130 level look to be a logical place to park a protective stop underneath. Simply put, if Microsoft meaningfully violates that $130 level in the near term, its long-standing uptrend is broken, and you don’t want to own it anymore.

Meanwhile, the Microsoft trade still looks as if the wind is at its back. For investors who don’t own Microsoft in their portfolio (or want to buy more), now looks like as good a time as any from a risk/reward standpoint.