It’s been a challenging couple of years for shareholders of Ford Motor Co. (F – Get Report) .

In the trailing 24 months, Ford has primarily ground sideways, failing to capture the 23% price move that’s propelled the rest of the S&P 500 higher over the same time frame. But Ford’s fortunes look like they’re changing in 2019.

After underperforming for the last couple of years, Ford’s price action has been making up for lost time, surging more than 33% higher on a price basis year-to-date, vs. a 19% charge higher in the broad market.

Thing is, this could just be the beginning – even despite weakness in China sales numbers just out, Ford’s rebound rally isn’t showing any signs of fatiguing this summer.

To figure out how to trade it, we’re turning to the charts for a technical look. 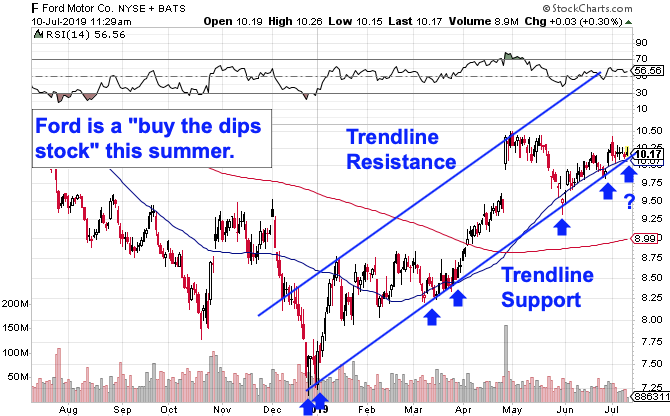 You don’t need to be an expert technical trader to figure out what’s happening in Ford’s price chart right now. In fact, the bullish setup in this automaker is about as basic as they get.

That’s a stark contrast to how Ford’s technicals looked last fall, when shares were selling off in a downtrend that was just as well-defined. Now, with that downtrend invalidated, and a new uptrend in play since January, it makes sense to “buy the dips” in Ford.

Longer term, the poor price performance that Ford has experienced over the last couple of years adds some confidence to this stock’s continued rebound potential. While Ford’s uptrend has been going strong for half a year, shares could continue on their current trajectory for quite a while before they get overextended in the context of where shares were just two years ago.

Likewise, relative strength paints an important picture for Ford here. While shares are outperforming in 2019, given the S&P 500’s massive charge higher year-to-date, they’re still not outperforming by the same magnitude that they were underperforming over the months leading up to the reversal.

That bodes well for Ford’s ability to continue to move up and to the right.

Near term, shares need to muster the strength to clear the $10.50 level, a price that shares failed to move through back in late April and early May. On the flip-side, as Ford tests trendline support for the seventh time in this uptrend, the next test of $10.50 could be imminent.

If you decide to pull the trigger on the Ford trade, prior lows at $9.75 look like a logical place to park a protective stop beneath. If this uptrend does end up, reversing course, you want to know (and get out) sooner rather than later.