It’s been a rough couple years for shareholders of General Electric (GE – Get Report) .

Actually, that’s kind of an understatement.

In the trailing two years, shares of General Electric have shed about 58% of their market value, vs. a broad market that’s rallied 28% higher over the same time frame. That’s pretty colossal underperformance — particularly for a blue chip so blue that it’s typically considered a “widow and orphan stock.”

But things could be changing for GE. Finally.

After systematically underperforming the rest of the market for more than two years now, GE’s price action is finally starting to show some signs of life.

Could GE become a buy this summer?

To figure that out, we’re turning to the charts for a technical look. 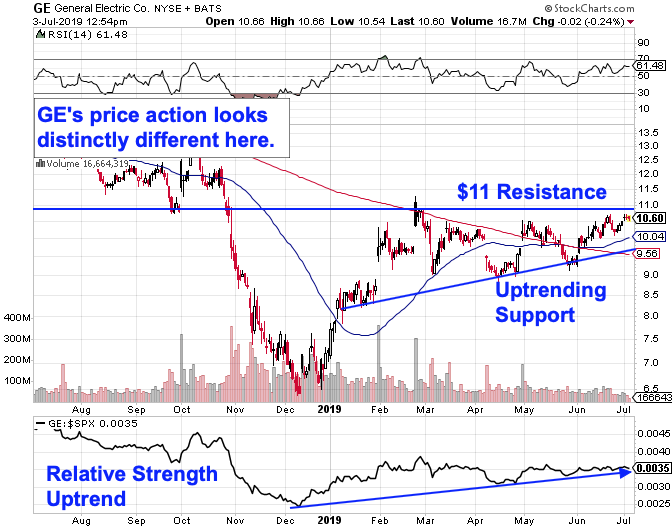 I haven’t been a fan of GE for a while now – the technical red flags started forming way back in early 2017, and they’ve only gotten worse in the intervening years.

Along the way, shares have been extremely technically obedient, selling off right on cue all the way down. But something important has changed more recently. Back in late April, GE was looking winded after bouncing higher at the start of 2019; with earnings on the horizon, I recommended selling a violation of $9 support.

Only that sell signal never happened. GE held $9, and shares have been building out a textbook bullish pattern ever since. With that context, it could finally be time to put GE back on your buy list this summer.

Shares are currently forming a long-term ascending triangle pattern, a bullish continuation pattern that’s formed by horizontal resistance up at the $11 level, with uptrending support to the downside. Simply put, a breakout above $11 is the signal that buyers have taken back control of shares.

For the first time in a long time, relative strength, the side-indicator down at the bottom of the GE chart above, is setting higher lows. That’s an indication that GE is starting to systematically outperform the S&P 500, quite a feat as the big index makes new all-time highs.

With shares hovering just below the $11 level right now, it might make sense to take a small starter position here with plans to scale into a full-sized trade once $11 gets taken out – that’s how I’m playing it. Doing that comes with a bit more risk than waiting until the $11 breakout happens, but it also comes with more reward.

From there, a logical place to park a protective stop is the 200-day moving average. If the 200-day gets violated, then GE’s bullish price setup has been invalidated, and you don’t want to own it anymore.

It’s a little too early to be outright bullish on GE this summer. But from a risk/reward standpoint, this blue chip is finally looking attractive for the first time in a long time.

Save 57% with our July 4th Sale. Join Jim Cramer’s Action Alerts PLUS investment club to become a smarter investor! Click here to sign up!