It’s been a banner year for the stock market – since the calendar flipped to January, the big S&P 500 Index has charged 16.5% higher on a total returns basis, a pace that would put the broad market up more than 40% if it kept up for the rest of 2019.

But not all stocks have benefitted equally from the massive market tailwind that’s been in force this year.

Intel has totally failed to participate on the rally year-to-date. So far, on a price-only basis, shares are slightly below breakeven in 2019. That’s some pretty awful underperformance during a year when most stocks have been moving higher.

But Intel’s laggard status looks like it could finally be about to change. After failing to catch a bid for most of this year, shares are finally starting to show some signs of life.

To figure out how to trade Intel from here, we’re turning to the charts for a technical look. 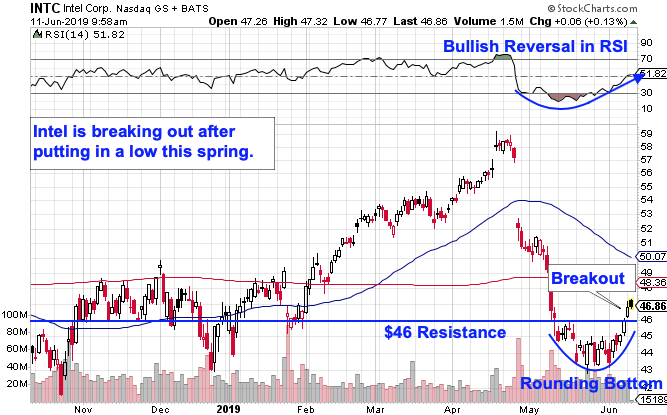 Intel’s price action year-to-date hasn’t been a clear-cut bearish story. Instead, Intel actually kicked off the year on a strong note, surging higher in the first three-and-a-half months of 2019 before rolling over on the heels of first-quarter earnings at the end of April.

Shares continued to push lower through May, but it looks like buyers are finally back in control of things here.

Intel spent most of May forming a rounding bottom, a bullish reversal setup that looks just like it sounds. The rounding bottom signals a gradual shift in control of shares from sellers to buyers – it triggered on a breakout through $46, the price level that marked the top of the trading pattern in addition to being a technically significant level last fall.

The breakout above the $46 level opens the door to more upside ahead. 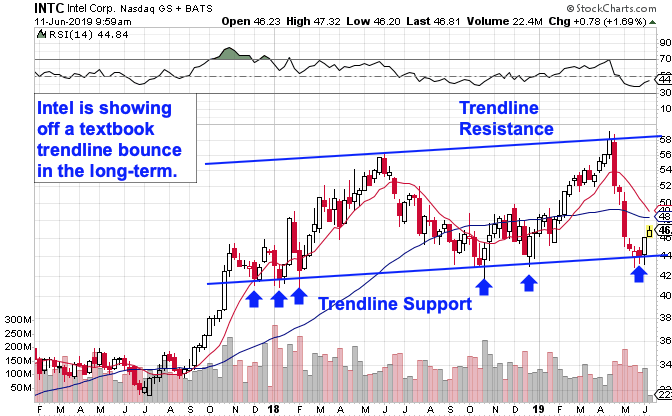 Intel has been holding onto a well-defined uptrend since the end of 2017, and while this spring’s correction has been the most volatile drop during that time frame, shares are catching a bid like clockwork right at trend-line support for the sixth time.

Simply put, if history is any indication of Intel’s likely moves from here, shares are heading back up and to the right. Prior tests of support haven’t been followed by immediate rallies – expect to see a couple of touches of trend-line support before the next move to the top of Intel’s channel. That provides ample opportunities for buyers to build a position in this tech giant before the next surge higher.