Just to put that in perspective, this year is also one of 16 price rallies above 13% in the first 96 trading sessions of any year stretching all the way back to 1928.

So, recent corrective action aside, it’s been a stellar year for stocks.

For the most part, financials have been along for the ride. Since the calendar flipped to 2019, the financial sector has spent much of its time trailing the rest of the S&P, but not by much. As I write, financials are only behind by a percentage point or two.

But that could be about to change.

As the financial sector tests a key level this May, financials look primed to rally as a group. That means, financials could be ready to springboard ahead of the rest of the market after playing catch-up all year long.

To figure out why, we’re turning to the chart for a technical look. 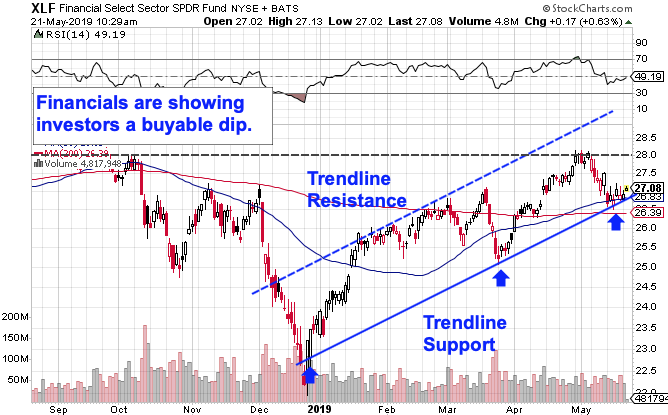 To decipher what’s happening in the sector, we’re taking a look at the SPDR Financial Select Sector ETF (XLF – Get Report) , a popular proxy for financials as a group.

At a glance, you don’t need to be an expert technical trader to figure out the prevailing trend in XLF right now – since shortly after bottoming back in December, this ETF has been bouncing its way higher in a very well-defined uptrend. Now, as XLF tests trendline support here in May, it looks like we’re seeing a buyable dip.

From a risk-management standpoint, the next move to make is a buy on a meaningful bounce higher from XLF. Waiting for shares to move higher off of their trendline reduces the risk of jumping in – particularly in the midst of a correction – by validating that the trend is still alive and buyers are in control of shares before putting your money on the trade.

Along those same lines, it makes sense to park a protective stop on the other side of $26 once the bounce happens. If shares retrace to $26, it means that the uptrend is definitively over and you don’t want to own XLF anymore.

Longer term, financials are showing high correlations right now, both among themselves and with the broader market. Still, while the S&P itself looks technically solid right now, XLF looks slightly better-positioned for upside this spring.