Markets are back in rally mode Tuesday, with the S&P 500 index up 1.4% at midday. That’s a welcome switch following seven lower days out of the last nine sessions that have dragged the S&P about 4% off its highs.

It’s not necessarily the modest size of the drawdown that’s got investors shaken up. Instead, it’s the sharpness of the move and the fact that it’s being dominated by the trade war news cycle that’s bringing flashbacks of February and October 2018.

In other words: Is the selling going to last?

The good news is that, in the context of the longer-term rally, the answer appears to be a resounding “yes.”

To try and decipher where the S&P is headed from here, we’re turning to the charts for a technical look. 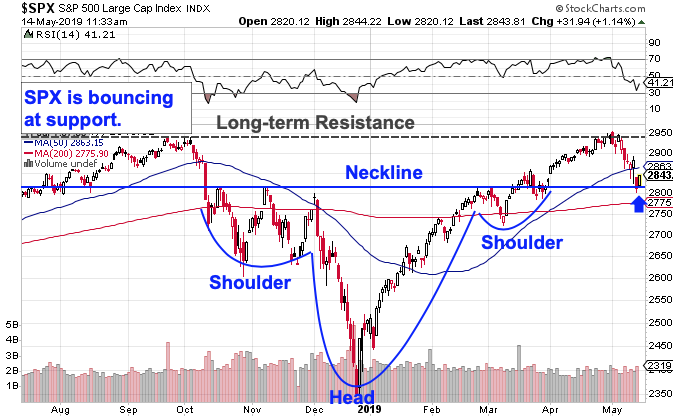 At a glance, the S&P’s current price trajectory continues to be extremely technically obedient. Back in the final days of December, it looked like the broad market was going to put in a low and rally higher; it did. Then in the early days of April a near-term breakout cleared the way to new all-time highs; those came a few weeks later.

That’s not to say that stocks have been easily predictable year to date, only that the market has more or less followed its path of least resistance this year.

Now the S&P is testing newfound support at that same breakout level. That suggests we’re due for a bounce and buyers are stepping back into the broad market in a big way Tuesday.

The move we’re seeing here, a throwback off of the S&P’s April breakout, suggests that we’ll see a re-test of the highs set almost a month ago.

That picture is confirmed by the long-term outlook for the market: 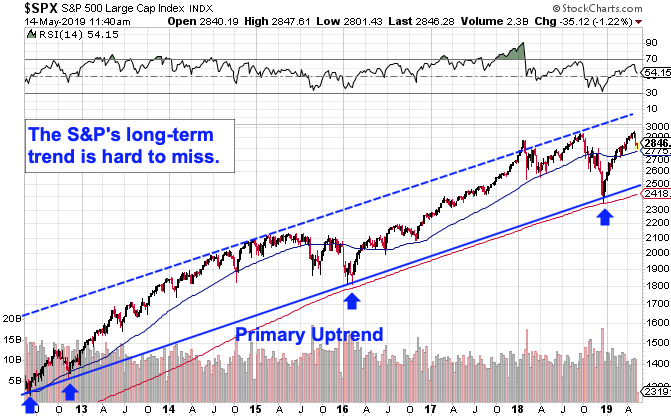 This long-term weekly chart of the S&P is about as straightforward as they get. Reaching all the way back to 2012, we’ve been in a “buy the dips” market. And despite the fact that we’re currently on the high-end of the S&P’s historical range we’re more likely to remain up near these levels than to retrace back down to the bottom of the price channel.

In each of the last two retests of trend-line support, it’s taken three years before the next steep correction that retested the primary trend (at a much higher level, mind you).

That jives with the S&P’s overall bullish bias; looking all the way back between 1927 and the beginning of May 2019, the S&P has spent nearly half of its time within 10% of all-time highs. That makes hanging out in this range the path of least resistance in 2019.

It’s too early to say whether Tuesday will mark the end of the May correction or whether we’ll give back another few points. Either way, the weight of the evidence says that it makes sense to keep buying the dips in 2019.