Markets are getting gut-punched to start the week; the S&P 500 is down 1.5% midway through Tuesday’s session. Despite a spectacular start to the year for the broad market, recent selling pressure has been raising anxiety levels as investors contemplate whether 2019 will be a year to follow the old adage of “sell in May and go away.”

If Tuesday’s losses hold into the close, it’ll mean four of the last five sessions have taken the S&P lower, undoing about a month’s worth of upside.

The good news is that, so far, there’s little evidence pointing to a longer-term top here. Given the size of the rally stocks have undertaken year-to-date, a correction isn’t just normal, it’s healthy for the market.

That means that the dip we’re seeing in the S&P 500 looks more like a buying opportunity than a cause for concern. And that’s translating into similar buy-the-dips opportunities in some of the market’s strongest momentum stocks.

After surging more than 45% higher since the calendar flipped to January, this tech favorite is showing off a buyable dip of its own in May. To figure out how to trade it, we’re turning to the chart for a technical look: 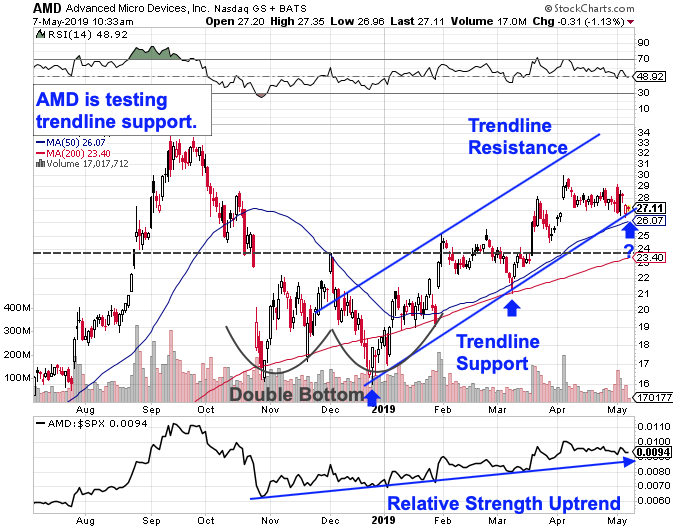 Right now, the prevailing trend in AMD is about as simple as they get: Shares have spent all of 2019 bouncing their way higher in a well-defined uptrending channel. So far, prior tests of the bottom of that channel have provided a low-risk, high-reward buying opportunity for shares, and the situation looks the same right now.

It’s important to note that AMD hasn’t just rallied higher this year – it’s also been very technically obedient. The last time we looked at this stock, shares were breaking out of a long-term bottoming pattern. Now, with that breakout level in the rearview mirror, more upside is the high-probability move.

That’s confirmed by relative strength, which has managed to hold onto an uptrend since late October, signaling that AMD has been systematically outperforming the rest of the broad market for the last six months or so.

From here, it makes sense to wait for a bounce off of trendline support to pull the trigger on AMD.

Risk management remains key, particularly as investors generally become more anxious about the market’s next likely move. The 50-day moving average has been acting like a solid proxy for trendline support, and that makes it a logical place to park a protective stop below if you’re long AMD.

Simply put, if AMD materially violates its 50-day, then the uptrend is over and you don’t want to own it anymore.

Meanwhile, all signs point to a bounce in the near term. Wait for it to happen before you join the buyers.