Last Friday, in the aftermath of the Gamespot’s historic eruption which sent the stock from $40 to the mid-70s (before it doubled again on Monday rising as high as $158), we had a feeling which way the wind was blowing and laid out all the Russell 3000 stocks that had the highest Short Interest (50%> of float).

Also on Friday, we put together an equal weighted basket of the companies listed above which on Monday… well… exploded, in light with our expectations that WallStreetBets/Robinhood traders would go down the list and systematically ramp up each and every one of these most shorted names, sending them in the stratosphere.

The U.S. Economy is headed for trouble…

Why are stocks absolutely soaring right now…? Yet at the same time millions of Americans are out of work… Commercial bankruptcies are piling up… Delinquent credit card debt is skyrocketing… Not to mention, we are smack in the middle of a pandemic that has all but forced our economy to a grinding halt… Something’s just not adding up. Friend, if you are confused by all of this… You are not alone… [Full Story]

And yet, while the market reaction was as we expected, one thing we did not anticipate was the “fracture point” which as we now know was Gabe Plotkin’s Melvin Capital, which effectively blew up today and suffered a multi-billion margin call on its shorts (as reported earlier), and only a $2.75 billion bailout from Citadel and Point72 (both prior investors in the fund) avoided a far greater disaster (had the $12 billion Melvin Capital been forced to start liquidating its longs to pay its margin calls, all bets would have been off).

What is most remarkable, however, is that a quick look at Melvin’s put positions – which had attracted the ire of WallStreetBets investors who were long the names that Plotkin was short – shows that most of them were amazingly the same as the most shorted names shown above! One wonders how many idea dinners Plotkin attended to pitch his positions to his hapless peers who followed him right into the Big Short Squeeze abyss, and how many other hedge funds had been caught in the conflagration. Incidentally the reason why the WallStreetBets vendetta was targeted at Plotkin is because unlike traditional shorts, it had to disclose its puts in its quarterly 13F. Ironically, had Melvin merely kept its bearish bets in the form of regular shorts – which hedge funds have no obligation to report – all of this could have been avoided.

And so, without further ado, here are Melvin Capital’s puts.

Why do we care? Because as S3 Partners founder Bob Sloan told Bloomberg in a TV interview today, GameStop could rise even further after surging 95% over the past week: “Get prepared for another round of short squeeze. You’re going to see GameStop go way higher.”

The reason: while the negative hit from Plotkin’s shorts and/or puts may have been neutralized, especially with the help of the nearly $3 billion in excess funding from Steve Cohen and Ken Griffin, which removes his incentive to cover shorts at all costs, earlier today we learned that as the hobbled hedge fund cralwed through the finish line, suffering massive P&L losses, countless other hedge funds took its place shorting Gamestop et al. In fact, GME’s short interest as a percent of float declined from 142% two weeks ago to… 139% today.

Bottom line: brace for even more fireworks as WallStreetbets reignites the squeeze, only this time it won’t be Melvin but some other hedge fund that will be crushed under the collective weight of a few thousand Robinhood bulls. Which, incidentally, would be great news for Ken Griffin. Not only does he know which stocks will be ramped by Robinhood before anyone else – after all Citadel is the biggest buyer of RH orderflow – but once the short hedge fund on the other side blows up, Griffen can just pull another Melvin, and swoop in with another “bailout loan-for-revenue” scheme – i.e., an offer that simply can not be refused – and forcibly takes an equity stake in another distressed hedge fund… and another… and another, and so on, all with the help of a few thousand stimmychecked Gen-Zers.

Professional investors such as Joel Greenblatt, David Tepper and Ken Fisher have already invested a combined $250 million in this company that experts are calling “one of the most disruptive stocks in the world.”

Want to know what stock Ian King has picked for 2021?

Click here to watch his presentation, and see for yourself...

Click here to find out the name and ticker of Ian's #1 pick...

Recently, Mr. Brown sat down with Chris Hurt to discuss the state of the stock market… And discuss his new #1 pick.[Full Story…] 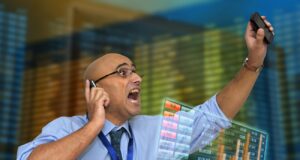 Become a Member for Free

By submitting your email address, you consent to receiving emails from Wall Street Watchdogs. You can unsubscribe at any time. Read our privacy policy.

Copyright © 2021. Wall Street Watchdogs - Nothing on this website should be considered personalized financial advice. Any investments recommended here in should be made only after consulting with your investment adviser and only after reviewing the prospectus or financial statements of the company. Wall Street Watchdogs, its managers, its employees, and assigns (collectively "The Company") do not make any guarantee or warranty about what is advertised above. The Company is not registered or licensed by any governing body in any jurisdiction to give investing advice or provide investment recommendation. The Company is not affiliated with, nor does it receive compensation from, any specific security.